Origins of the Great Sphinx 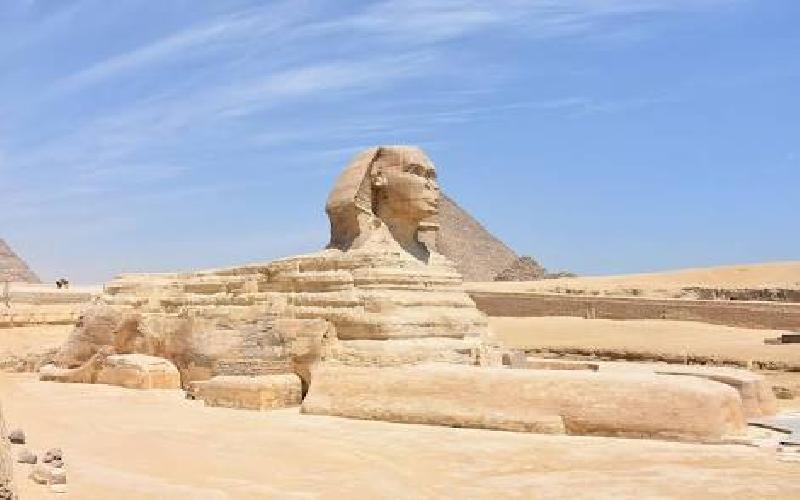 Today, when we heard the word Sphinx, the first thing that comes to our mind is the great sphinx that stands at Giza, Egypt, near the pyramids (known today as the Great Sphinx of Giza). But the truth is that the sphinx is a creature that is common in the myths and beliefs of our ancient ancestors. In fact, each ancient civilization had their separate depiction of the sphinx. Ancient Greeks depicted the sphinx as an animal having a head of a woman, a body of a lion, and a wing of an eagle while ancient Egyptians depicted it as wingless lion with a head and a breast similar to that of a man.

During the construction of the Great Pyramids of Giza, great portion of a rocky hill was left to which they gathered the rock to build the pyramid. The rock hill was then carved into a huge lion having a head of a man. The face of the man resembles the king of the fourth Egyptian dynasty called Chephren. The whole carving stands to a height of 20 meters and a length of 73 meters.

But why does the lion becomes an important part of the Greek and Egyptian mythology? This is because in the ancient times, lion were abundant in the deserts beyond the Nile River.

Because of the reputation as the dominant predator, they had made a great respect to it. They are also seen as a strong and beautiful animal to which the Egyptian sculptors had carved lions in the entrances of temples as a mythical guard against intruders. Later on, the lion’s head were replaced with the head of humans in which they commonly used the face of their current and departed kings.

Ancient Egyptians considered their kings are descendants of their sun god – Ra. When their existing king died, they believed that he will ascend to the sky to become their sun god. Therefore, the Egyptians had carved the great sphinx having the face of their dead king as a representation of the king who becomes a sun god to protect the pyramids.

The Great Sphinx of Giza was the only large carving of a sphinx in Egypt. Although there are no other carvings as large as this, there are many kings who made such carvings during their ruling. One example of this is the sphinx that was made with a face of a woman – Queen Hatshepsut. Queen Hatshepsut sphinx had a beard which represents her power over Egypt.

TAGS : Great Sphinx of Giza Pyramids of Giza Egyptian sculptors Ancient Egyptians Egyptian mythology Queen Hatshepsut sphinx
Let us know how you like this article. Like it and Rate it below.
194 0
0
Thanks for rating this article
0 stars - by 0 user(s)

15 Best Activities To Do In Great Barrington, Ma, Usa

If United States is on your cards this summer, then you should plan a vacation to Great Barrington also. It is one of the most happening places which offers a lot of sightseeing and activities to tourists.

Sri Aurobindo was one of the most influential figures in the History of India. Read mor about him here..