The Influence of the Ottoman Turks on the Middle East 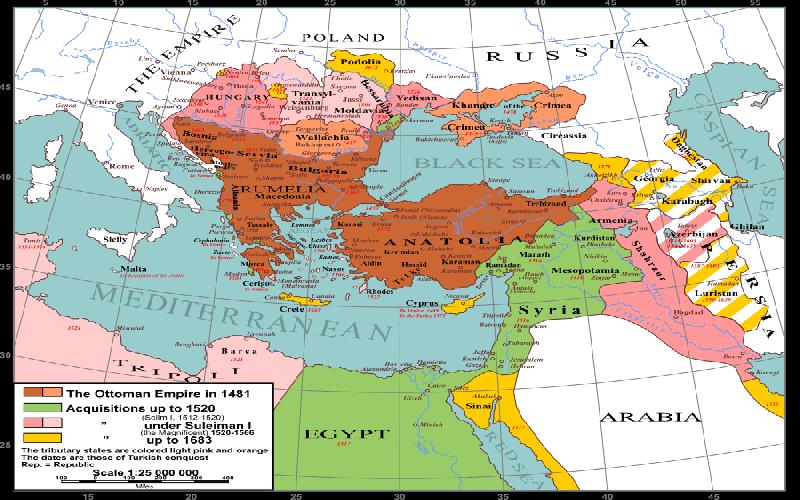 The Middle East is often considered the most volatile region of the world today. Amidst all the discussions that surround its problems, few attempt to understand the historical legacies of this region that might be at the root of the violent discordance experienced there today. Much of these can actually be correlated with the lost pride of Middle East psyche after the dismantling of the Ottoman Empire and the mass psyche to regain it again.

The Origin of the Ottoman Empire

Sometimes, a very innocuous happening can change the course of world history.

In the first two centuries of the last millennium, certain nomadic tribes in Central Asia were forced to migrate Southwards due to attacks of the Mongols. They settled in Anatolia, a state lying on the borders of Islamic and Christian worlds, where they came in contact with Islam. They not only accepted Islam as their faith, but also adopted the role of fighters or Ghazis, whose ultimate duty was to give their life in war for protecting Islam. An innocuous migration of innocent tribal’s had laid the foundation of an empire which would write the history of three continents for many centuries.

In the late thirteenth century, the Seljuq Empire in Anatolia collapsed, and was divided into many states, one of which was Sogut, founded by one of the Ghazi tribes whose chief was ERTUGRUL. After him, his son Osman became the leader. He united many of the Turkish tribes in the area and formed a formidable army that made several significant conquests.

After his name, his kingdom began to be referred as the Ottoman Empire, and the ruling Turkish rulers were referred as the Ottoman Turks. Their great prowess in organisation and administration laid a foundation of a state that kept on expanding its boundaries for several centuries and its height had an area of over five and a half million square kilometres and a populace of over 35 million under its control, spread over adjoining territories in Asia, Europe and Africa.

The Conquest of Constantinople

The most important event that changed the course of future history of the world during the rule of Ottomans from 1299 to 1923 A.D. was the conquest of Constantinople on May 29, 1453, under the leadership of a young Sultan, Mehmed II, aged only 21, who assumed the title of Kayser-i-Rum or Roman Emperor, after this historical victory. At that point, Constantinople was the greatest center for knowledge and learning apart from being the gateway between the East and the West. Capturing this city which was from then on renamed as ‘Istanbul’, opened the path for several processes of intermingling between Muslim Turks and Christian Europeans, that benefitted both, had enormous impact on growth and development of sciences and arts, and also led to everlasting changes in trading patterns.

The Legacies and Influences of Ottoman Empire

Needless to say that this great empire, during the course of its reign, influenced everything that came it across. Expectedly, it had a huge influence on the Middle East. Some of these influences can be summarised here.

By capturing many areas of Christian Europe, as well as Muslim areas of Iran, Arab, and North Africa, The Ottoman Turks not only protected Islamic states from better equipped European armies, but also allowed the spread of Islam far and wide in the territories of the empire. The highest position in Islamic world, the Caliphate, belonged to the Ottoman ruler or Sultan. The military victories and the expansion of boundaries of Ottoman Empire raised the dream and possibility of a worldwide Islamic state among the theocratic philosophers, a process that actually replaced territorial nationalism in most Middle East territories with a kind of Pan-Islamic loyalty that has been one of the greatest defining characteristics of the Middle East mindset till date.

2. Domination of Religious Theocracy on the State

The Ottoman Empire introduced the concept of Millet - major religious groups that ruled their communities under the patronage of Ottoman Empire. Millets retained their own religious laws, traditions, and language under the protection of the Sultan. They strengthened the practice of mixing of religious head and the state ruler in a way that had never been done earlier on such an extensive scale for such a long period. In the process, it created a legacy of rule by theocratic leaders that continues to be practiced in Middle East even today in certain ways.

3. Organisation of Bureaucracy and Forces

The Ottoman rulers were pioneers in organizing bureaucracy in a way that has influenced the evolution of governments and their organisation in all modern states. Their governmental functionaries were well organised and efficient. One of their great innovations was the Janissary - infantry units created by recruiting highly talented non-Muslim youth from conquered areas, and providing them excellent career opportunities to obtain their unflinching loyalty.

Ironically, while the ascent of Ottoman Empire laid the foundation of Pan-Islamism, the policies practiced by Ottoman Turkish rulers made tolerance to different religions an accepted policy in the Islamic world even today. The acceptance of secularism by modern Turkey is the prime example, though the emphasis on it had some backlash from the Muslim populace in Arab world during the early twentieth century. Unfortunately, the ongoing Arab-Israeli conflict has overshadowed all such influences in recent times.

6. Discovery of Sea Routes to India

The Ottoman Empire and its control of all land routes leading to India from Europe was one of the main reasons for all the historical voyages including those of Vasco d' Gama and Columbus. On one hand they lead to discovery of the American continent, while on the other, the new sea trade undermined the importance of Middle East region, and contributed to its impoverishment that actually became a factor in the fall of Ottoman Empire.

In summary, the series of events that begun with the migration of some nomadic tribes from Central Asia in twelfth century actually changed the course of world history and left an irreversible impact on the world, especially the Middle East.

TAGS : Ottoman EmpireLegacy of Ottoman EmpireHistory of Middle EastCaliphatePan IslamismPan Islamic Empire
Let us know how you like this article. Like it and Rate it below.
7.81K 2
2
Thanks for rating this article
4 stars - by 2 user(s)