Indian campaign of Alexander the Great 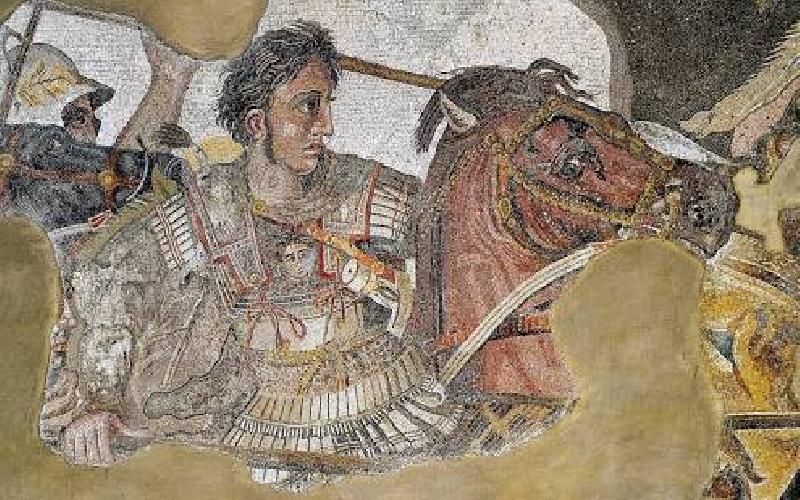 Alexander III of Macedonia, better known as Alexander the Great, is perhaps the greatest war leader the world has ever seen. Read a short biography of him here.

He first came to the war-front at the mere age of seventeen, leading a part of his father's cavalry. Alexander the Great, the most renowned king even two milleniums after his lifetime, began his journey there. He became the king at the age of 20 and soon the world added the word 'Great' with his name.

Alexander was born to the King Philip II of Macedonia in 356 BC. He was very brave and fearless from his childhood itself. He became the student of great philosopher Aristotle at 14 and was brilliant in politics and war techiques. He was included by his father in the discussions with the rulers of other kingdoms frequently.

It didn't take long for Alexander to be an assistant to his father in ruling and the leader of his military.

Alexander commenced his renowned world conquest at the age of 26, with an army of 30,000. He first led his troups to Persia, defeating their kingdom and possessing all of the Asia Minor region. Later he moved to Phoenicia. After a battle of 7 months, he conquered the city of Tier, which is considered to be his greatest military achievement. After the capture of Gaza, he moved to Egypt. He didn't have to face any resistance there, as the Egyptians were happy to receive him.

There was an island named Pharos to the west of Nile delta. Alexander bulit a town there, which was later known as Alexandria, the world famous city.

Alexander was soon attacked by the Persian forces. The battle was known as War of Arbela, from which Alexander emerged victorious. Later he went on to conquer Babylon and other Persian cities.

Continuing his conquest, he reached Afghanistan soon, having defeated the all the kingdoms west to Caspian Sea. He built many towns during the journey and married the daughter of a landlord he met.

Alexander expanded his forces including the Persian soldiers and reached India in 324 BC. He faced the largest challenge so far there, from the King of Punjab, Pores. Although he won the battle, Alexander was impressed with Pores and he returned all the captured places to him.

But his forces saw frequent internal revolts which made future conquests impossible. Alexander decided to return to his homeland, having had conquered a great part of Europe and Asia. He had also built 32 cities in his name by then.

However, during his return, he was bedlaid due to Malaria at Babylon. Not long after, the great conquerer said goodbye to the world, in 323 BC. Even after two thousand years, no campaigner comparable to him hasn't been born yet.

TAGS : alexander war alexander the great biography history war heroes
Let us know how you like this article. Like it and Rate it below.
116 0
0
Thanks for rating this article
0 stars - by 0 user(s)

Elephants were the mainstay of Kings and soldiers on the battlefield for thousands of years. They served their purpose and have left behind their imprint.