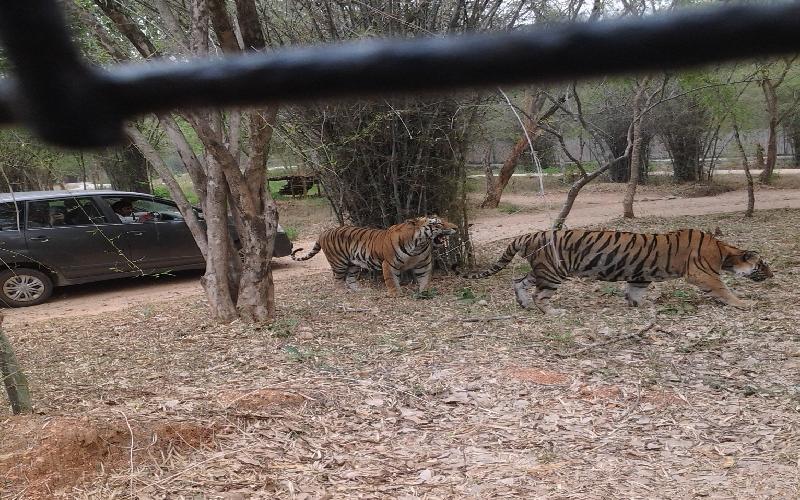 It is always very surprising when nature unfolds its every layer. Sometimes we cannot even visualize what will be the next show. Biological parks enable us to feel that thrill. Bannerghatta national park is a great gift of Karnataka State Tourism Development Corporation in this context. Safari, Zoo, Butterfly Park and many more other attractions to see at Bannerghatta National Park.

I have an inborn attraction towards nature and its surprising shows. Nature involves plants as well as animals. This attraction took me to the Bannerghatta National Park.

We reached Bengaluru on 23rd May’2017. The next day, we were thinking as to where we should go and enjoy. Then a thought crossed our mind that we should go to a place where we can see nature from very close quarters. In the city of Bengaluru, there were only two places where we thought of having that luxury being one with nature; one was Bannerghatta National Park and the other Lalbagh.

We started our journey. The park about 22 kilometers from city was situated in a very nice location. On reaching Bannerghatta we were enlightened about the Safari Trip by the ever helpful staff member present at the ticket counter. We presumably booked tickets for safari. Once we went inside, we were in for a surprise. A long queue of visitors were already present awaiting their turns to take the Safari ride. We hurried through and stood in the queue being the last in the line but not for long as people kept joining in and the queue in few minutes became longer and longer behind us. Though the sun was beating down on us mercilessly which resulted in our profusely sweating but that did not dampen our spirits. The excitement and the anticipation kept us going and we patiently waited in the Queue.

After around 50 minutes as we neared the front of the queue. The front group of the queue which included us were escorted to 6 different sheds which acted as waiting points for the safari buses. The arrangements were so orderly that group from each shed boarded the bus based on the position they held in the Queue. These were all maintained by a group of very dedicated staff members. As our turn came we boarded the bus. The windows of the buses had strong wire net protection and all in all the bus felt very secured. We got ready with our cameras and mobile phones for capturing  invaluable images which awaited us. The safari started and we all were very excited.

There were many parts of the safari. The first part was the herbivorous safari. We saw the beautiful gazelles with black strips as well as with bright orange colours on it. Other than this we saw Bison, Chital, Sambar, Sloth Bear, Barking Deer, Wild Boar, Mouse Deer, Bonnet Macaque, Porcupine etc. The herbivorous safari was followed the bear safari. As we entered that zone, we saw some bears sitting in the road eating something. There was a car in front of our bus and we saw the bears moving dangerously close to the car windows. These were all captured in our lenses. However the bears thereafter started moving away from the road and we were able to move forward.

We entered the third part which  was the elephant safari. There we saw two large elephants close to a lake. The fourth part was the lion safari.  The safari bus driver who was a very nice person stopped the bus in a very strategic point where we could see the lions silently and clearly. It appeared to be a pride of four lions. As we moved slightly forward we saw a lioness too maybe a member of that pride. Our cameras had meanwhile captured a whole lot of pictures with more to come as our trip progressed. The fifth part was the tiger safari. As we moved ahead we saw three golden brown tiger roaming in the road. Out of these two were adults and one was a cub. This scene was so beautiful and thrilling that I can’t explain.

The last but not the least was the white tiger safari. This  was the best part. From a vantage point courtesy the bus driver we were able to clearly see and enjoy five beautiful white tigers as they moved around. They were large in size and moved so elegantly around. One of them kept on coming and sniffing near the bus. These were all treat to our eyes and we did not waste time in capturing these images in our lenses.

After completing the safari trip we visited the Zoo inside Bannerghatta National Park. The zoo was crowded. Inside the zoo there were several battery operated vehicles which one could hire for round trip of the zoo. We walked around the zoo and were excited to saw different animals, species etc. The main attraction was however the Butterfly Park. Flying colours in the true sense!!

Other Attractions at Bannerghatta National Park

All in all Bannerghatta National Park is an amazing place with all facilities right from parking to hotels, resorts, restaurants and restrooms. All these are within the park itself.

All this made my journey a memorable one. Thanks to Karnataka State Tourism Development Corporation.

Best Places to See in North East India During Holidays

Best Places to Visit in Vietnam

TAGS : Bannerghatta National Park Zoo Safari Trip Karnataka Tourism India
Let us know how you like this article. Like it and Rate it below.
274 3
0
Thanks for rating this article
0 stars - by 0 user(s)

A youthful woman who loves children the most....and that's me. A creative person by nature i keep on learning at every stage of my life and feel excited to share knowledge with everyone. Being a teacher, my writings reflect my experience and feelings. I write in a wide array of topics and hope to impress readers with my feelings and views. Happy Reading!

The National Museum At Paro Can Amaze Any Visitor

There are many travel destinations in Paro. Bhutan itself is a paradise state.

Jamshedpur is around 275 kilometers away from Kolkata. Visitors from Kolkata come to weekend tour to the beautiful city.