Jainism: Its Origin and Development 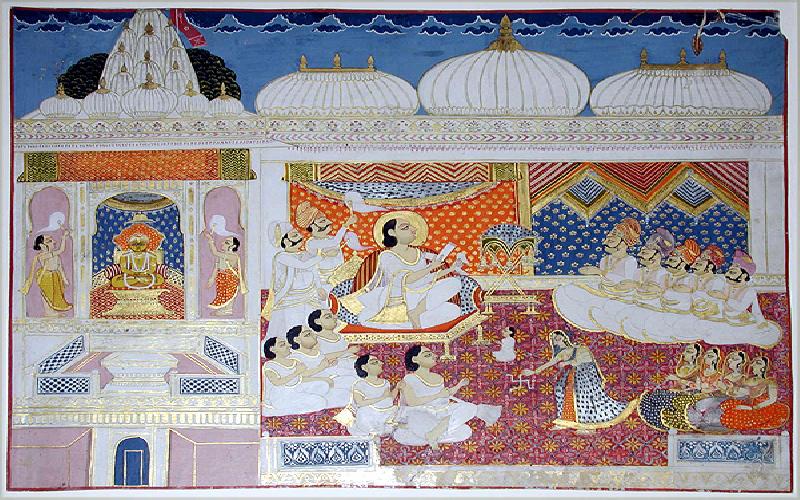 Jainism is one of the philosophies that originated in ancient India. It preceded Buddhism and just like Buddhism, has become a part of Indian spiritual practices, and deeply influenced social behaviour and values. Non-violence is its greatest contribution to the Indian civilization. It survives in modern Indian society as a sect, closely interwoven with the rest of Hindu society.

Jainism was one of the many schools of philosophy that thrived and evolved in the ancient Indian civilization. As was the case of different schools of thoughts in those days, they evolved and survived with their own similarities and differences. Thus, it has many aspects in common with the mainstream thought of Sanantana Dharma or 'eternal duty' that is the most commonly followed philosophy in India today, and is usually referred to as Hinduism.

The followers of Jainism are known as Jains.

They are the followers of certain divine individuals, which are called Jina, meaning a person who has attained victory over his or her own weaknesses. Jinas are also called Tirthankars, meaning creators of spirituality. Their teachings are the essence of Jainism.

As per scriptures there have been twenty four Tirthankars till date, of which the last two are historical personalities whose existence is accepted by historical evidence. The last and the twenty fourth in this tradition was SHRI Vardhamana Mahavir who lived from 599 to 527 BCE. The twenty third Tirthankar was Shri Parsvanath, who lived between 872 to 772 BCE.

The Basic Tenets of Jainism

Both Digambar and Swetambar traditions equally follow the basic tenets of Jainism. Jainism philosophy holds that the universe is eternal or Shashwat, meaning thereby that is was never created, it always existed and will always continue to exist, although the life exists in this universe in cycles of evolution and destruction.

Jainism philosophy believes in existence of souls in all living beings. The soul is considered a part of the divine almighty power of universe referred to as God, but also has its own identity. However, such a belief makes all living beings related with divinity, and hence it becomes a duty of every person not to cause harm or pain to any living being. The belief in soul as a part of universal divinity means that the Jain philosophy treats the universe and the almighty god or divinity as one and inseparable. Thus the world is not viewed as a creation of almighty god, but as a form of existing divinity that is inseparable.

As per Jain belief, it is possible for a soul to purify itself and attain divinity or Nirvana. The 24 Tirthankars are representative of such purified souls. The faith in divinity of soul is also the basis of extreme non-violence preached by Jainism. In Jainism, there is no scope for any violence against any living creature, and all such violence represents violence against god. Jainism is often credited with the concept of Ahimsa or non-violence, which is an integral part of Hinduism and Buddhism today. Jains not only do not eat any non-vegetarian food, they also refrain from dairy products as well as root vegetables in order to protect those plants' survival.

The Swetambar tradition was formed by the division of the followers in to two different schools of thought around two to three hundred years after Vardhaman Mahavir. One historical belief is that in the fourth century AD, the chief Jain monk Acharya Bhadrabahu realized the coming of the famine, and lead a group of about 12000 monks to South India. When he returned years later, he saw a new school of Swetambars in existence. In 453 AD, the Valabhi Council formalized the Swetambar tradition.

Swetambars believe Mahavir was married and had a daughter. On the contrary, Digambars are of the belief that Vardhman Mahavir, the last and the most revered Tirthankar of Jains, never married.

The two traditions also differ on the Namokara Mantra, which is the main Jain prayer. Swetambars believe all the nine lines are a part of it, whereas Digambars believe only the first five lines constitute this holy chant. Even though there exist two different sects of beliefs, it may not be wrong to say that their differences are not very substantial so far as the core philosophy of Jainism is concerned.

Impact of Jainism on Religion & Culture in India

Jainism is an integral part of Hinduism as it exists today. Most of the emphasis on non-violence and vegetarianism in Indian religious thought and culture has its origin in Jain philosophy. The flexibility of religious patronization can be nest understood by analyzing the religious practices of the India's earliest historically documented empire. The Maurya dynasty was established by Chandragupta Maurya who followed and patronized Sanatana Dharma. His son, Bimbisar was a follower and patroniser of Jainism, and his son, Ashoka, arguably the greatest of monarchs in ancient India, was a follower of Buddhism, to the extent that he sent his son and daughter to foreign countries to spread Buddhism.

Incidentally, the principles of Jainism remain most popular among the trader class, who were considered lower in the hierarchy of mainstream Hindu philosophy compared to scholars and soldiers. Another reason they remained restricted in traders was probably because the scholarly class which were considered most important in traditional social system had little incentive to shift to Jainism, for the soldiers the principles of non-violence were impractical, and for the lower classes, there was little attraction for the emphasis on purity and self restraint. As a result, Jainism was patronized mostly by the trading and business class, who were always considered part of the Hindu society, even when their sub-identity was also recognized.

TAGS : Orign of Jains Origin of Jainism history of Jainism Tithankars history Non-violence in India History of Ahimsa
Let us know how you like this article. Like it and Rate it below.
1.47K 3
3
Thanks for rating this article
5 stars - by 3 user(s)