The significance of celebration of Krishna Janmashtami in India. 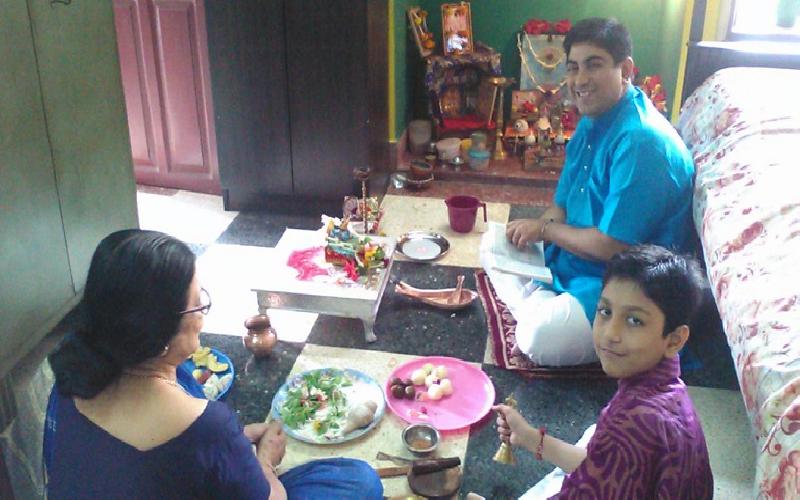 The article speaks about the significance of Krishna Janmashtami. It is celebrated keeping in mind the birth of Lord Krishna, the eight avatar of Lord Vishnu.

So in fear of death he imprisoned both Vasudeva and Devaki.

Lord Krishna was born on a rainy day and Vasudeva crossed the river Yamuna to reach him to Gokul where Nanda and Yashoda could take care of him.  King Kansha tried all his tricks to kill Lord Krishna at young age in Gokul. He failed. Lord Krishna after growing big killed King Kansha and ended the tyrannic and cruel rule of his mama.

The verses in the Bhagavad-Gita (a sacred book narrated by Lord Vishnu) say, that whenever there will be predominance of evil and decline of religion, I will reincarnate to kill the evil and to save the good. The main significance of Janmashtami is to encourage goodwill and to discourage bad will.

In the late 80s and early 90s, eminent filmmaker BR Chopra made Mahabharata in Doordarshan, and as TV serial had remained extremely successful. Nitish Bharatdwaj played the role of Lord Krishna in the serial. All the episode related to the birth of Lord Krishna flabbergasted the audience. His mama’s role was played by Goga Kapoor. The viewers saw the battle between Lord Krishna and Mama Kanghs was very well depicted by BR Chopra.

Nitish Bharadwaj studied Bhagwat Geeta, very well and his performance in the battlefield of Kurukshetra where he persuaded Arjun to fight the battle had remained matchless. The character of Arjun was played by Feroz Khan. The pandavas were heavily dependent on Lord Krishna in their war against the kauravas. Lord Krishna only asked Bhima to hit Duryodhana on his uru, meaning the thigh, which led to his victory. Lord Krishna asked Arjun to throw his arrow at Karna when his chariot got stuck in mud and he tried to release it. The same Lord Krishna, provided cloth to Draupadi, at a time when Duryodhana asked Dushshashan to take away her clothes.

Lord Krishna is worshipped as God by numerous hindus all across the world, and the effort of filmmakers in reaching the epic related to Lord Krishna had always been considered noble and appreciated. Both the film Mahabharata and the serial Mahabharata should be restored.

It meant the following. "Whenever there is decay of righteousness O! Bharatha And a rise of unrighteousness then I manifest Myself!"

Praritranaya Sadhunam Vinashaya Cha Dushkritam Dharamasansthapnaya Sambhavami Yuge-Yuge." It meant the following. Bhagavat Gita (Chapter IV-8) "For the protection of the good, for the destruc­tion of the wicked and for the establishment of righteousness, I am born in every age."

TAGS : Lord Krishna Lord Vishnu Krishna Janmashtami Mahabharata
Let us know how you like this article. Like it and Rate it below.
4.21K 1
0
Thanks for rating this article
0 stars - by 0 user(s)

Traveling in the heart of the Bucegi Mountains represents an unforgettable experience for any person looking for stunning natural views and a little bit of mystery. .