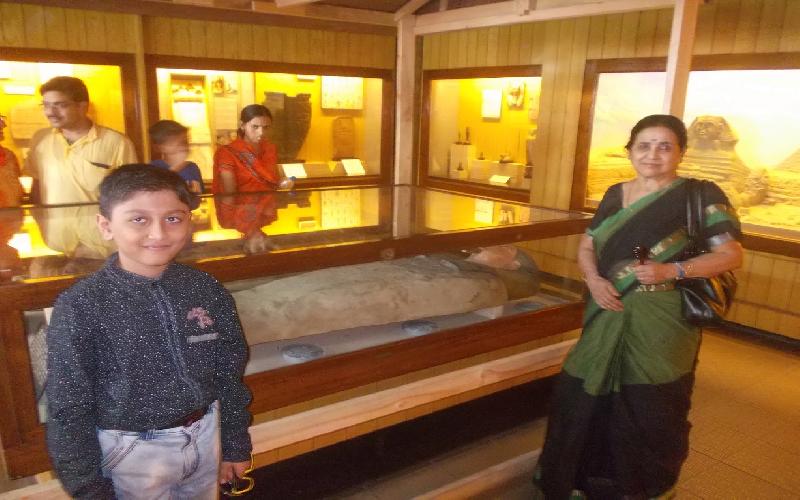 Indian Museum in Kolkata is a fabulous museum. The Egyptian section in the museum is awesome. The exhibits can take the viewers to ancient Egypt and make them feel they are there 5000 years back.

Indian Museum located in Jawaharlal Nehru Road in Kolkata is a brilliant museum. It is more than 100 years old. Those who visit the museum get enriched in different subjects including biology, anthropology, history, art and other subjects.

It is a huge museum and it takes almost one full day to see the different sections minutely. On the 1st Floor there is an Egyptian Section. For popularity and historical importance that section had been made Air Conditioned.

The Egyptian section of the Indian Museum also called the Egyptian corner is amazing. Inside the section there is a model of a mummy.

Coming back to the model of mummy, during the period when Egyptians developed their lifestyle beside the banks of river Nile, there was the traditions of burying the dead bodies in mummies. The Egyptians believed that death took the humans into another world where they required comfort including the blankets, household items, pillows, to name a few. So whenever the Egyptians died they were buried in wooden structures and inside the structures called mummied they were given those necessary items like blankets, pillows, household items, which were believed to have been of use to the dead person after death. So the model exhibited in the Indian Museum show how the dead body is enclosed in a wooden box which looks like coffin and inside that how the dead used to be given the items of daily necessity.

On every side of the models and pictures that are exhibited there are literature relating to the sources and also the relevance of the still models in the context of Egyptian civilization. There are also pictures of hieroglyphic scripts in the corner. Archaeologists and historians are still trying their level best to unearth the meaning of the hieroglyphic scripts. Along with letters there are pictures in the script like birds, animals, trees, etc. so most of those scripts look like manuscripts.

There are also photos of religious life of the Egyptians and the Gods that they worshipped. There are pictures of certain animals which were worshipped as Gods, for example the Jackal God also called Anubis is exhibited in the museum. Even the Sun God, the Rain God are also exhibited in the museum. In this perspective there is similarity of the Egyptians with the Indus Valley people. In the initial period the Indus Valley people or the Harappans also had nature worship. The different forces of nature like fire, lightning, rain all had serious impact in the lives of early human beings. So they thought if these forces of nature which were powerful and could bring natural disaster could be worshiped then the chances of facing natural calamities would be reduced down.

There are also exhibits of Egyptian art and their coins that were in circulation during the ancient period. The other pictures show the social life of the Egyptians. There were congregational meetings and get-togethers where ideas were shared. The laws and rules were developed during the early period. Paper was developed from Papyrus and were in use for writing and other purposes. The metals were in circulation and all of them like copper, silver, bronze were used for different purposes.

The exhibits are in the form of static models and pictures with writings mentioning the dates and events related to them. It is not possible to re-create the life of the Egyptians with all of them. A better exposure to Egyptian culture can be found if one goes to Egypt and visit the historical places himself or herself. But the effort made in the Indian museum to create an environment where the visitors can feel that they are already more than 5000 years back in Egypt is a noble effort.

The museum was made when Indian was a colony of the British and as such the architecture of the museum has gothic style. Many people who are interested in architecture take images and use them for their own knowledge on architecture.

Winter is the best time to visit the Indian museum. The ticket fares are reasonable and not exorbitant. There is only a requirement of having first hand knowledge of the history relating to the sections exhibited in the museum. The entire tour of Indian museum including the Egyptian section is a very educative tour when one can get enriched with knowledge.

TAGS : Indian Museum Egyptian Section Egypt history Fiqh pyramid Giza
Let us know how you like this article. Like it and Rate it below.
559 5
0
Thanks for rating this article
0 stars - by 0 user(s)