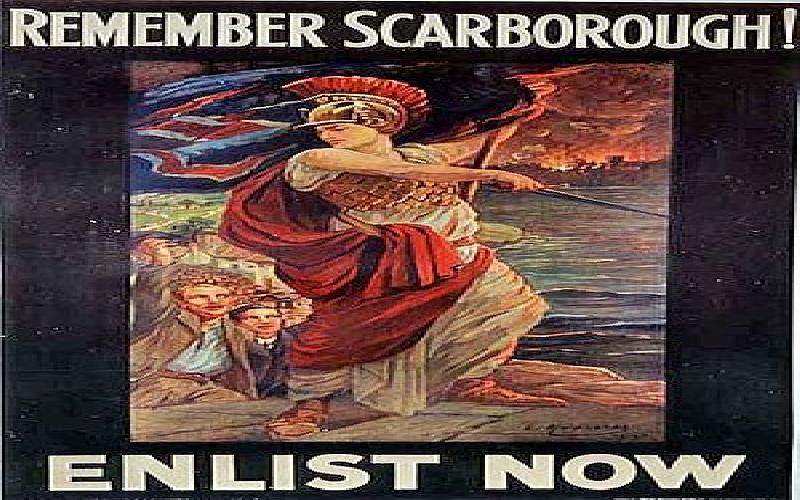 The Germans Plan A Trap

On December 16th 1914 the Royal Navy failed to prevent the German Navy shelling the coastal towns of Hartlepool, Scarborough, and Whitby.

However the Germans planned to trap the British battlecruisers into taking on the entire High Seas Fleet. The plan is aimed at reducing the British numerical advantage in dreadnought battleships and battlecruisers. Hipper's battlecruisers were the bait for the trap, yet unfortunately for the English coastal towns targeted these ships had some of the most accurate gunners in the Imperial German Navy.

The Royal Navy Misses An Opportunity

The German raid on these towns was the first time that the British coast had been bombarded by enemy ships since the Anglo – Dutch Wars of the 17th century.  They launched the Scarborough Raid in the hope of luring the Royal Navy  battle cruisers into a trap as they believed the latter would be determined to protect their coastline. The Germans planned to shell each town for only a few minutes yet that was long enough to cause considerable damage.

For the Royal Navy its inability to stop the raid or indeed to sink any of the raiding ships was frustrating besides bringing them criticism from the press. Up to that point the First World War was going badly for the British navy, and news of the victory over the Germans at the Falklands had not reached home yet.

The Germans Get Away Whilst The Coastal Towns Count The Coast

What the British public and the German High Sea Fleet commanders did not know was that the Royal Navy had intelligence from Room 40 that if used properly could have led to heavy German losses.

After all the Germans would not have expected the Grand Fleet to be behind Beatty's battlecruisers.

Also had the Royal Navy's signaling been of a higher standard they could have caught the raiders. Poor signalling almost proved disastrous at Jutland in 1916. The lack of protection for the battlecruisers was disastrous.

However in the end the German battle cruisers caused considerable damage in Hartlepool and Scarborough. There were just over 100 people killed and several hundred injured. The majority of those killed in Hartlepool were children in a playground that was close to the coastal guns the Germans were aiming for.

Lenman B (2004) The Chambers Dictionary of World History, Chambers, Edinburgh
Massie R K (2005) Castles of Steel - Britain, Germany and the winning of the Great War at Sea, Pimlico, London

TAGS : Royal Navy German Navy Hipper Beatty Scarborough Whitby Hartlepool First World War
Let us know how you like this article. Like it and Rate it below.
99 0
0
Thanks for rating this article
0 stars - by 0 user(s)