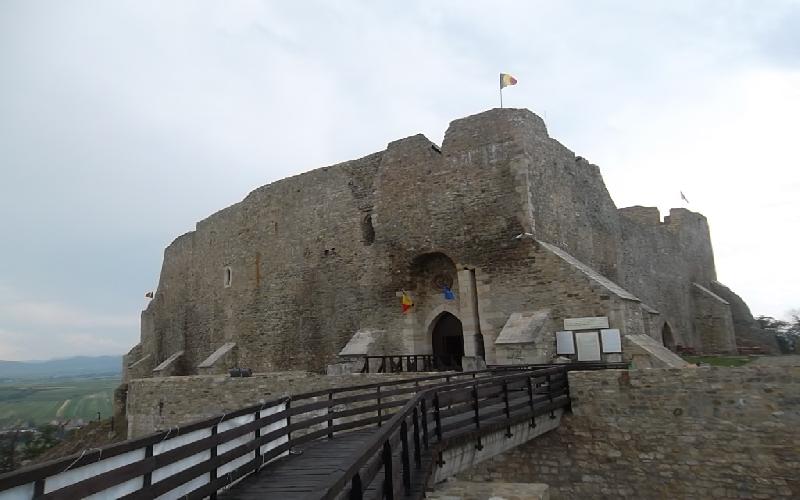 A visit to the Neamt Citadel is like a journey back into the fascinating and agitated history of the Romanian province of Moldavia.

If you travel to the beautiful Romanian province of Moldavia, one of the great objectives you must not miss is represented by the mighty Neamt Citadel. This astonishing medieval fortress lies on a hill near the town of Targu Neamt in the Neamt county and it is by far the main tourist attraction in the area. Earlier this month I went on a trip to that region and I visited the mighty Neamt Citadel for the second time in 5 years. Even if the site of the majestic fortress with its thick stone walls, dizzying archway bridge and cool and dark rooms was almost unchanged since my previous visit, I was still as impressed by its greatness as I had been on my first visit.

The citadel had a long and troubled history. It was built during the reign of Petru I Musat (1375- 1391) and its first mention in a document dates from 1395, in an act issued by Hungarian king Sigismund of Luxembourg, one of the foreign invaders who tried to defeat the Moldavian army, but failed like so many others did. The most glorious years of the citadel took place during the reign of Stephen the Great (1457-1504), undoubtedly one of the most celebrated figures in Romanian history.

It was a time in which the fortress was consolidated and turned into such an impenetrable stronghold that it managed to hold on successfully during the siege of the forces of Ottoman Sultan Mehmet II.

Unfortunately, after Stephen’s death, Moldavia grew weaker and weaker, and some of its rulers agreed to cooperate with the Turks who demanded them to destroy the fortresses in order to make the country more vulnerable to attacks. The Neamt Citadel suffered partial destruction during the centuries which followed, but even if there was an attempt to burn its thick walls, it survived.
It was conquered again in 1691 by the Polish army led by king John III Sobieski, which encountered a heavy resistance from a small group of Moldavian soldiers who became legendary for their heroism. It was the last significant event in the history of the fortress.

The Polish were soon banished from Moldavia and after that event the citadel lost its importance and it was neglected for a long time. It deteriorated considerably, but thankfully the authorities recognized its huge historical significance and started restoration works which ended in 2009, so now it has its gates open for allthose who want to know more about the history of the region.

After the restoration access to the citadel is relatively easy; all you have to do is walk up a paved alley until the mighty fortress appears in its full splendor in front of your eyes. The view you get when you see it from close range is overwhelming. The thick and high exterior walls and the arched bridge built on 11 stone pillars which represent the pathway to the entrance will definitely leave a profound mark on you. After crossing the dizzying arch bridge you enter the inner yard through a drawbridge, which used to have a trap for undesired visitors at the end of it, and you’re finally inside the medieval fortress.

After strolling through the yard for a while it’s time to explore the 21 rooms rearranged during the restoration. Those rooms allow visitors to see how life was during those times in which conditions were harsh and people always had to be prepared to leave their daily activities and go to war to defend their country from invaders.

The atmosphere of those hard times is reconstructed by using mannequins which illustrate the way in which locals looked, dressed and were equipped for battle. There were several rooms which impressed me, such as the Council room, the Hall of Arms, the chapel and especially the prison, where you can see a few criminals chained and living in harsh conditions. There are even replicas of rats which appear to roam happily in the room, while inmates are watching them terrified. However, prisoners from that particular room were those who committed minor crimes. Those guilty of terrible crimes such as betraying their country also had their special place in the citadel, a dark room where they were thrown away and simply abandoned until they died of starvation.

At the end of the visit to the Neamt Citadel, a tourist can only leave satisfied knowing that he or she has learned a lot of new things about the history of Moldavia. The majestic fortress, just like the people who inhabit Moldavia and Romania in general, went through a lot of suffering and destruction since it was built, but nothing could bring it down. Thanks to the efforts of those who worked hard for its restoration, it still watches over the Neamt County and the surrounding regions. Once hostile to its unwanted guests, it’s now open and ready to receive all those who want to see a true wonder of Romania.

TAGS : Romania historical attraction medieval fortress Moldavia
Let us know how you like this article. Like it and Rate it below.
319 3
0
Thanks for rating this article
0 stars - by 0 user(s)

The Clock Tower From Piatra Neamt- A Landmark Of A Lov

A clock tower situated in the historical center of a Romanian city is still in great shape five centuries after its inauguration..