The truth about the 1986 People Power revolution 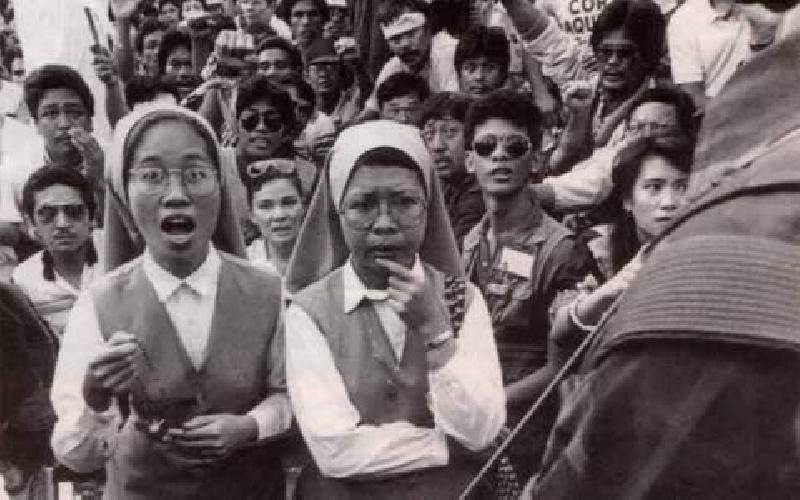 One February 25, 1986, at exactly 10:20 am, Corazon Aquino had take her oath to become the President of the Philippines along with Salvador Laurel as her Vice-President. The historical oath-taking was held in Club Filipino, in Greenhills, San Juan. Two hours later, when Marcos was also declared in Malakanyang Palace as the President of the country.

At 9:30 pm of the same day, Marcos along with his family and some close friends evacuated Malakanyang Palace bound to Hawaii, USA. Moments later, the Filipino Masses flock to Malakanyang Palace. Out of their anger and frustrations, they broke-in to the Palace and destroy and set-set fire the pictures, documents and other belongings of the Marcos family.

While those people at EDSA and Channel 4 burst into tears and scream after hearing the news of Marcos’s withdrawal from the country. Peace and democracy had return to the country after more than 20 years of suppression.

Possible Reasons that Leads to the Revolution

There are many things that happens which possibly caused the People Power Revolution and gives-way for Marcos to abandon our country and restores democracy in the Philippines. Some of them are as follows:

The assassination of the former Senator Ninoy Aquino on August 21, 1983 had become an instrument for the Filipinos to make constant protest and rallies. The citizens of the country wanted to know the real scenario during the time of assassination, the reason behind the assassination and the real mastermind.

The Filipino citizen was not contented in the manner of trials made against the principal accused of the case. They just became more angry when they learned that all of the accused were sentence and found to be not-guilty about the case.

The sudden proclamation of the Snap Election in the whole country for the positions of President and Vice-President that will be held on February 07, 1986. As it turns-out, many Filipinos were not able to vote and that there are nationwide claims of election-related violations particularly cheating.

Proclamation of the Batasang Pambansa

The Batasang Pambansa proclaimed Ferdinand Marcos as the President and Arturo Tolentino was the Vice-President. On February 16, 1986, after the ballot counting was done, a heated arguments erupted which resulted to a walk-out by the COMELEC members as well as the oppositionist members of the Batasang Pambansa because of the rampant cheating made during the counting of ballots.

The National Council of Churches joined the nonviolent protest after the counting. They demanded the government to show to the Filipino people the clean and honest result of the election. The Bishop of Manila – Jaime Cardinal Sin, released a letter and plea to the citizens of the country asking them to demand, criticize and object about the on-going cheating done by government officials in a nonviolent manner.

Headed by Corazon Aquino, a huge numbers of crowd gathered at Luneta on February 16, 1986. There was estimated more than 4 million Filipino people gathered. Cory Aquino ask the boycott of all the company, industry and businesses that belongs to the government as well as those that belongs to Marcos cronies. She ask also the Filipino people not to pay their taxes, electric and water bills, and boycott the media who works for the government.

The peaceful revolution lasted for 4 days after the Marcos dictatorship ended. From February 22 to 25, 1986, every Filipino citizen in the country had proven the importance of unity. They had gained a full self-confidence and capacity of every citizen to achieve the nationwide change of the country through a peaceful means. The nationalistic ideals of every Filipino was awaken and gives importance to the value of freedom and democracy.

TAGS : 1986 EDSA People Power Revolution 1986 Snap election reasons that leads to the People Power revolution
Let us know how you like this article. Like it and Rate it below.
905 0
0
Thanks for rating this article
0 stars - by 0 user(s)