The Origin History and Development of Hinduism

Hinduism is not a religion like Islam and Christianity 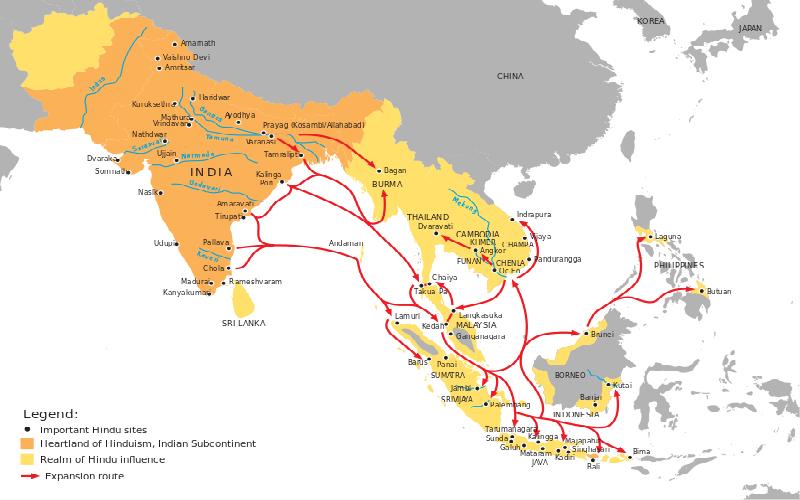 The traditional term for Hinduism is ‘Sanatan Dharma’, which means ‘eternal duty’. Its primary emphasis on appropriate conduct and its lack of communal identity makes Hinduism very different from Western religions like Islam and Christianity. Also differentiating it from them is the fact the Hinduism is not a single set of dictates, but an amalgam of several schools of philosophy, which often differ from one another, but do not lose respect for each

Hinduism is often considered a religion like Islam and Christianity, thereby leading to several misconceptions. While Hinduism remains one of the earliest religious philosophies of mankind, it is not a religion given to mankind by a messiah. It is a human philosophy for life and its conduct that evolved with a lot of thought and debate from within the ancient Indian civilization, often with multiple schools of views and opinions. Its origin and evolution are a testimony to its scientific temperament usually missing in religions, and its primacy to conduct and human welfare make it very different from religions that are focussed on identity of their communities.

HINDUISM, as you may be aware, is a misnomer. In Sanskrit, the ancient Indian language, from which all Indian languages and dialects have arisen, there is a word, 'Sindhu' meaning river. Since in ancient times, all concentrations of human civilizations were around major rivers, those lands were called 'lands of Sindhu' or 'lands of rivers'.

Trading foreigners called those lands 'Hindu' or 'Hind', which came to be called 'India' by British, and after colonization it became the name by which world addressed this country.

The same thing happened with religion. The ancient Indian religious philosophy is not a 'religion' in the sense Islam and Christianity are. It is more a sort of human philosophy of its civilization. It was and is still called 'Sanatana Dharma', or 'eternal duty', and revolves around the simple question as to what should be the duties of a person in his or her different capacities. So the duty of a soldier will be different from those of a singer, and the duties of a person as a father different from his duties as a son.

One of the Oldest Human Civilizations

Evolution of Hinduism – The Religion of ‘Dharma’

In ancient India, religious strictness was followed in matters of conduct of an individual, and even though various schools of religious and spiritual philosophies existed in the form of multiple sects, they were not considered as different religions. Unlike the modern religions of the Western world, these schools were not aimed at giving rise to communal identities. On the contrary, their differences lay in what they considered the best form of human conduct.

In Sanskrit, the ancient Indian language (and perhaps the oldest of the Indo-European languages surviving today), the word that is equivalent to religion is DHARMA, meaning ‘duty’. Since the concept of duty applied to every human being, it was called SANATANA DHARMA, meaning ‘eternal duty.’ Today, Hinduism is regarded as a synonym of ‘Sanatan Dharma’. Unfortunately, its treatment as a religion ignores its different concept.

Thus, in ancient India, religion was just a matter of social values, not a divine diktat. This is the underlying difference in Hinduism. In fact, the primary emphasis on religion as a means to promote better human conduct, is the reason why religion in India has always been far more tolerant and less fanatic than anywhere else in the world during the pre-modern times, and continues to be so even today, not only among Hindus, but people of all religions.

Concept of God in Hinduism

The conceptualization of God in ancient Indian philosophy is also a result of the understanding and analysis of the many great philosophers of those times, and is thus more an indication and admission of ignorance rather than an assertion of superiority. An important aspect of this philosophy is the fact that there are different schools of philosophical thoughts all or at least many of which are equally revered and respected, even though different schools may be preferred by different individuals. In fact, some of them vastly differ in their ideologies, and yet respected by all - a level of tolerance that did not always exist, even in the field of scientific thought till the last century.

One school of philosophy considers God as omnipresent, and a part of everything. It visualizes God as a creator, not being different from its creation. In this philosophy (Advaitavad), the whole universe is a part of God, and so is everything that exists, though each of these things and beings is not god. Then every human soul (atma) has a temporary existence, and its ultimate fate is to get united with the rest, i.e. god (parmatma), a process called 'moksha' or 'nirvana'.

There is another somewhat different school of thought (vishishta advaitavad) in which the creator is separate from the creation, but becomes one after nirvana.

However, before we go any further, it is also necessary to understand such complicated philosophy of god was not always understood by the common folk. In fact, the rishis and munis (thinkers) elaborated three ways in which a person should approach God. The path of devotion (bhakti), the path of action and duty (karma), and the path of knowledge (Gyan).

The first is the 'path of devotion' (Bhakti) - in which a person devotes whole of its existence and possession to the love of God, therein immersing his complete ego and existence. In the process he frees himself from all worldly attachments and greed, and attains a detached state where he is no more affected by the material pursuits and wealth. This is the path in which one needs to focus on God alone, and to be able to do that, one needs to imagine or perceive God in a certain form. The devotees follow two different methods for this purpose. One is to focus on God without any form (nirakar bhakti) - where the God is perceived like all pervading, all powerful and omnipotent entity. The other is to worship God in a perceivable human like form (saakar bhakti) - this is a method that became more and more popular over the centuries because of the ease with which the worshipped entity could be shared and discussed together by a large mass of mankind.

In different times, and different places, God began to be worshiped in different forms, amidst the realization that it is only the form that is changing, the essence remains the same. So even though the God is the same, he is known and called by many names, worshiped in many forms, and depicted as different entities. Each of these forms is a deity, and represents God.

'Dharma' includes a belief in the goodness of the almighty God, and this gives rise to the belief that the God will and does come to mankind in times of need. The Indian philosophy gave rise to the belief that God can approach humans in any form, including the human form. So arose the concept of ‘avatar’ or "incarnation", where the Lord himself took birth as a human, lived the whole life like any other human, just to follow the rules he has set for himself, and during his lifetime did whatever was required to let the good defeat the evil, and to ensure that truth and fairness prevails. Thus in Hinduism, God is worshiped in many human forms, in which he is believed to have taken incarnations.

A unique thing about God in Hinduism, even in perceived human forms, is that it is gender neutral. The male and female are supposed to be complimentary halves, and both are worshiped. For a civilization that has been there for a few thousand years now, the concept of God is as deep and interlinked with philosophies, myth and legends, as one would expect it to be.

TAGS : Hinduism is not a religion Difference between dharma and religion Advaitavaad sanatan dharma eternal duty dharma
Let us know how you like this article. Like it and Rate it below.
2.26K 3
3
Thanks for rating this article
5 stars - by 3 user(s)