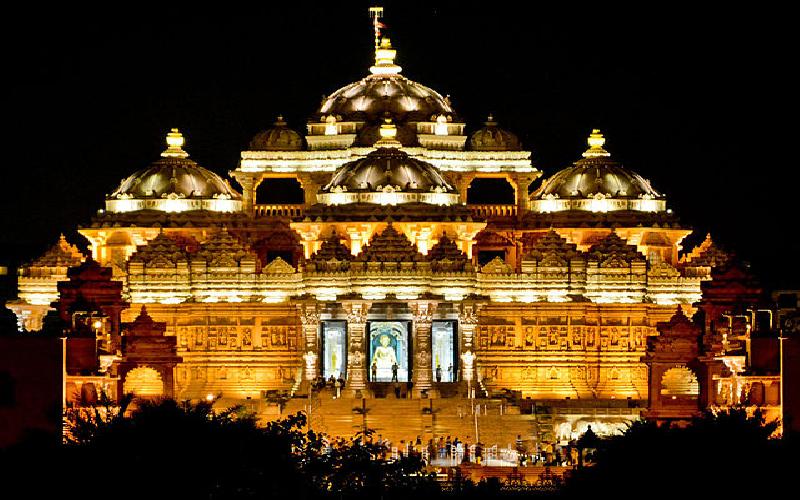 It is a good idea for those visiting Hindu Temples to be aware of the Etiquette and Customs. Generally, Hindu people and places are fairly tolerant to people of other religions, the only condition being that they respect the sanctity of the premises and do not indulge in behavior that is considered disrespectful there.

Hindu temples are just like any other place of worship, where people come to feel rejuvenated. Like other places of worship, the temple aura affects visitors and inspires them to think differently, beyond selfish and petty interests, and focus on mental peace, harmony, self realization, and attaining the higher state of one’s spiritual and selfless being. It is only appropriate that all visitors maintain and contribute to that environment by following the expected customs and etiquettes.

HINDU TEMPLES are places of community worship - places where people get together to express their respect and devotion to the almighty Lord of the universe, pray to him and seek his blessings. Worshipping in temple is part of the process of devotion that is considered to purify one’s self from the vices and corruptions of material existence. In Hinduism, there are three paths to salvation - GYANA or knowledge, KARMA or action and BHAKTI or devotion and submission to the Lord. Temples are the places for bhakti.

By devoting one’s self to the larger forces of the universe as represented by the divine deities, the devotee merges her ego into the larger cosmos and becomes one with it, thereby attaining the final salvation and actualization, a state of selflessness that is considered absolutely pure and uncorrupted, ....

the state of NIRVANA or MOKSHA. For lesser folks, temples offer an opportunity to pray to God, seek forgiveness for one’s sins, or seek blessing and mental peace for self and family.

In the earliest traditions of bhakti in ancient India, God was worshipped as being formless (NIRAKAR), or as important parts of nature. In Vedic culture, the earliest form of Indian civilization, god is considered omnipresent, and the universe is considered a part of the almighty god. The primary elements of nature where worshipped, mostly by speaking prayers or chanting of verses. Typically these prayers were said while sitting around the holy fire (AGNI), which is also considered a very highly revered part of universe, because it represents the energy and purification. Thus the Vedic temples often have an open space in the centre, and a shelter on all sides of it. Very few of such temples exist today, but many existing temples have elements or areas of those practices.

Most Hindu temples of today are devoted to particular deities - forms in which the Almighty god is worshipped. This has its origin in the school of SAAKAR bhakti - of worshipping Lord in a particular form. As there can be innumerable forms of the Lord, there can be innumerable deities, all of which, however, depict the same god - the single almighty power of the universe. This is very peculiar feature of Hinduism, wherein forms are treated as different from substance, and do not create divisions among people. Different Hindus may worship different deities, without having anything against other deities or their worshippers, for the simple reason that all deities represent the same power of universe, which we humans are not capable of understanding in totality.

Etiquettes in a Hindu Temple

Traditionally, shoes and footwear are kept out of houses and rooms. While the tradition of wearing shoes inside home has gradually become accepted, the tradition is still followed rigidly in temples. In all Hindu temples, shoes or footwear must be left outside. For this purpose, there are places to keep your footwear. Similarly, there would usually be a tap nearby to wash your hands before you enter the temple.

Indians have a tradition of touching the feet of elders in the family as a sign of reverence and respect. The same way, reverence and devotion is expressed in the temple. Most people touch the ground of the temple and touch their forehead with the hand, symbolizing placing of temple sand on their forehead. All fold their hands together, to offer their respect of self-submission before the Lord. It is common to find a metallic bell at the entrance of the temple. Devotees ring the bell as a sign of their arrival.

Every person is supposed to be tolerant inside the temple. Hence quarreling or violence inside the temple is not permitted, neither is smoking or drinking allowed there. Because a large proportion of Hindus are vegetarian, all non-vegetarian food are banned within temple premises. People are not supposed to harm even animals within the temples. As temple is a place where people focus on their inside and indulge in introspect their own conduct, loud and noisy discussions should be avoided there.

Usually people visiting a temple will first go and pay their respect to the main deity, whose idol will be placed in the centre of the temple. Often, the priest, called PUJARI, will place a red powder on the forehead of the worshippers, as a blessing of the Lord. During morning and evening, AARTI or prayers are held, along with devotional music, in which all those present participate. Aarti is done with a small lamp lit by vegetable oil.

It is common to offer sweets to the Lord, as another sign of devotion. Symbolically, a small offering is placed before the Lord, and the rest is returned back to the devotee, as PRASAD. Prasad is supposed to be shared with as many as possible. For this reason, there is often a large gathering of destitute at the temple entrance or exit, and people coming out of temple usually share their Prasad with them.

After the NAMASKAR, or the bowing before the Lord, and the aarti, it is usually customary to take a round around the idol, or the temple. Most temples have design that allows one to take round around the Lord. Then, the devotees also visit the other deities. Often, one temple of a particular deity will also have idols or pictures of many other deities too, since all of them are ultimately forms of the same Lord of Universe. Devotees can make donations to the temple, by dropping money in a box placed for this purpose. Larger donations can be made directly to the temple management.

Some temples have their own customs. Some temples allow entry only taking a bath there. Most temples do not allow devotees to carry items made of leather.  Temples are important places of religious practice. They are also important place for social interaction. One is required to follow basic etiquettes and customs within the temple, and not indulge in any disrespectful behavior there.

Why Do Hindus Regard The Cow As Sacred ?

Most Indians, particularly Hindus, Jains and Buddhists, do not eat beef. For many, cow is considered a sacred animal, and its killing is prohibited in certain Hindu scriptures or religious tales. 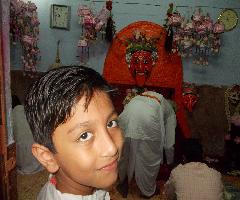 The Craze Of Devotees In Offering Puja In Jahura Kali T

The article speaks about the sacredness of the Jahura Kali Temple in Malda in the state of West Bengal. Many devotees from different parts of the country come to offer puja..