Bucegi- The Mountains of Myth and Mystery 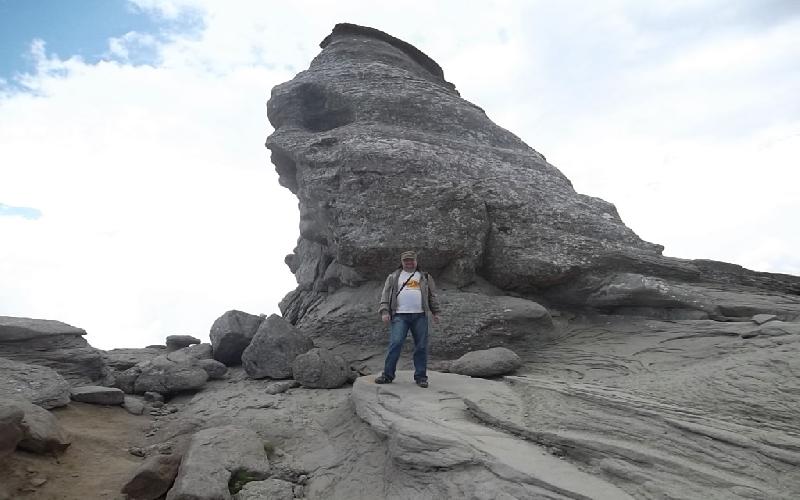 Traveling in the heart of the Bucegi Mountains represents an unforgettable experience for any person looking for stunning natural views and a little bit of mystery.

It is no doubt that Romania has to offer to those who visit it some of the most spectacular natural landscapes in Europe, and among these the Carpathian Mountains are famous for their incredible beauty. The Bucegi Mountains, which are part of the Southern Carpathians, represent a huge tourist attraction for people who visit the Prahova Valley and who come, among others, to see two of the most impressive elements of nature in Romania: the Sphinx and Babele(The Old Ladies), two spectacular rock formations shaped  by wind and rain throughout millions of years which can be found in the Bucegi Plateau, at an elevation of approximately 2000 metres above sea level.

To reach those amazing figures, one must first choose how to travel there. The most frequent option is represented by the Busteni cable car, which takes the travelers from the foothills of the mountain to the top in a short period of time. Unfortunately, due to the large number of tourists who are eager to reach the Bucegi Plateau even in normal week days, one must wait for quite a long time before entering the cable car, but luckily for me  there was another choice available at that time: a trip by a four-wheel drive vehicle, which represented a relatively new alternative for tourists. I chose this option because I didn't have to stay in a queue to buy tickets for the cable car and the price of the trip was exactly the same as that of the cable car.

The road up to the Bucegi Plateau, which used to be a dirt road until recently, is quite exciting and it offers an incredible scenery; there are also some deep ravines which make the journey more exciting and even dangerous in some parts. The asphalt ends close to the top and the last portion of the road is full of stones that force the drivers to slow down. Eventually we reached the plateau in good conditions and climbed to its two main attractions, the Sphinx and Babele.

The Bucegi is believed to be Kogaion, the holy mountain of the Dacians, the ancestors of the Romanian people, and the place on which their supreme God, Zamolxis, lived in a cave.

Although the location of this mountain is still a mystery and there are several other mountains which are associated with Kogaion, there is definitely a mythical feeling a person experiences when seeing the Sphinx, the product of millions of year of constant work from nature and one of the symbols of Romania. It perfectly resembles a human head, and when you stand close to him you have a strange feeling that you're in the company of a Dacian warrior who is ready to fight until death to protect its land from invaders.

The 8-meter high and 12-meter wide rock will certainly stun every tourist who will be  even more amazed after seeing Babele, some strange mushroom-shaped rock formations situated just a few metres away from the mighty Sphinx. It is almost unbelievable that these rocks were shaped by nature and not by human hand.

Besides these two amazing rocks,the tourists who come to the Bucegi Plateau can also take an one-hour trip to the Heroes' Cross on the Caraiman peak,a memorial dedicated to those who lost their lives trying to defend Romania in World War I; unfortunately I didn't have time left for that trip, so I could only admire the majestic cross from the Busteni resort, at the foothills of the mountain. It is also definitely worth seeing from a close range.

The Bucegi Mountains Plateau,with its fabulous nature-carved rocks, is a place of incredible splendor and another proof that Romania is an amazingly beautiful country. Once you visit them, these unique places will always remain in your heart and make you come back one day.

TAGS : Romania natural wonder the Sphinx mountain plateau
Let us know how you like this article. Like it and Rate it below.
657 0
0
Thanks for rating this article
0 stars - by 0 user(s)

A visit to the Neamt Citadel is like a journey back into the fascinating and agitated history of the Romanian province of Moldavia..