History of the United Nations organisation 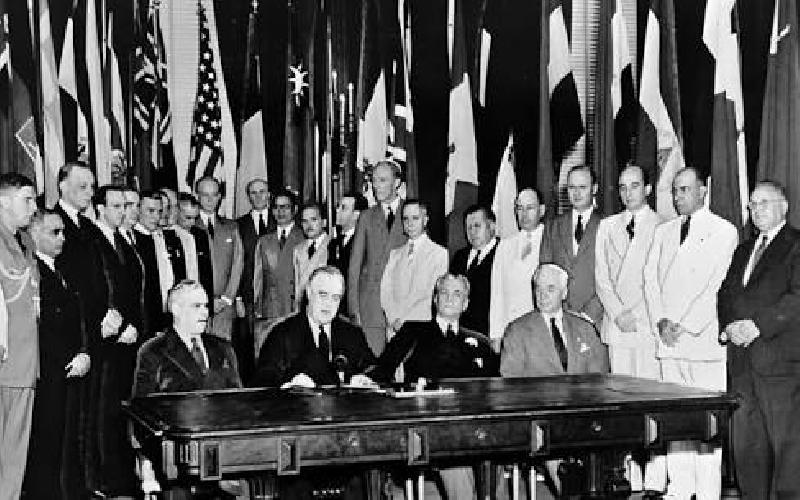 United Nations Organization is the largest international organization in the world. It works for peace across the globe. Read a brief history of UN below.

There was a time when the world wished for nothing but peace. After the first World War it was manifested in the formation of League of Nations. But even that organisation could not prevent a second World War from happening. It was during the Second World War, an organization was concieved to prevent another great war from taking place. That organization is now a symbol of peace; the United Nations Organization (UNO). The organization will be of 70 years of age next year.

Early in the 18th century, renowned thinker Immanuel Kant had put forward the idea of a world organisation of nations.

But it took decades to come to existence. In the World War II that commenced in 1939, the nations were in two fronts; the Axis Powers and the Allied Powers. It was the victorious members of the Allies who took the first step towards a world organisation.

Following many discussions, 26 nations joined hands for the idea initally. The name, United Nations, was suggested by the erstwhile US President Franklin D Roosevelt. The UN charter of the formation of the organisation was signed at Washington DC on 1st January 1942. But it took 3 more years to come into effect, after the conclusion of the war.

On 25 April 1945, the Alliance Powers conducted a meeting and constructed a charter. The existence of League of Nations had come to an end on 18 April. The charter was signed on 26 June 1945. There was representatives from 46 nations then. During the meeting, 5 more nations were given the membership, including Poland, which had no represenatives. there was 51 member nations.

The first assembly of UN took place in Januray 1946 at London. Trygve Lie from Norway was elected as the first Secretary General of the organisation. On 20 October 1947, the official flag was recognised. The flag consists of the world map surrounded by plive branches of white colour in light blue background. The flag must not be placed under any other flag.

The organization has now 193 active members. A nation get membership after the recommendation of Security Council and the votes in favour with a 2/3 majority. The Security Council is the most powerful body of the UN. USA, UK, China, Russia and France are the permanent members of the body. The headquarters of UN are situated at New York. Ban Ki Moon from South Korea is the current Secretary General of UN.

India was not free at the time of formation of UN. However, they got an invitation to the Sanfransisco meeting and signed the UN Charter. India is in now making efforts for a permanent place in the Security Council, as the largest democratic country in the world.

TAGS : world organisation world history politics international organisations
Let us know how you like this article. Like it and Rate it below.
239 0
0
Thanks for rating this article
0 stars - by 0 user(s)

The memories of Rana Kumbha, Rana Ratan Singh, Queen Padmini, Mirabai makes the Chittor Fort a place of wonder. The tourists get amazed to see such a huge Fort built on hilltop so many years ago..