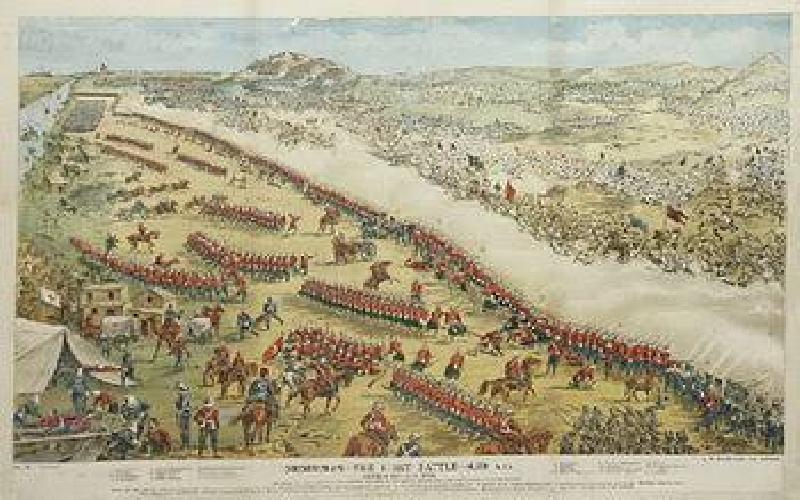 This article is all about the battle that determined who controlled the Sudan.

The Battle of Omudurman was the climax of a fourteen year struggle the British and the Sudanese Mahdists. The prize at the end of the conflict was to have complete control of the Sudan. The British were motivated by the need to protect their interests in Egypt, whilst the Mahdists aimed to keep hold of the territory that they had already conquered.

British Plans To Regain The Sudan

The British had planned to takeover the Sudan yet the Mahdists had beaten them to it by capturing Khartoum and wiping out its garrison commanded by General Gordan. That defeat had hurt British pride, and the world's largest empire was not used to losing any colonial wars. The quest for revenge though was made difficult by the distance that would have to be traveled to reach the Mahdists. The new commander thought out the best way to win the conflict, yet had to resist pressure from London to speed the campaign up and thus increase the risk of being defeated.

The recapture of the Sudan did not resume until 1896 when Sir Herbert Kitchener was in charge of operations.

He enlisted the help of the Royal Navy that used ten gunboats plus transport shipd as the British advanced using the river Nile instead of  covering tricky terrain. It meant the Mahdists found it harder to halt the advance.

In April 1898 Kitchener had masterminded victory at Atbara River yet knew complete victory would not be certain until the fall of Omudurman  (the Mahdist capital). He did not rush to get there, and planned an attack very carefully.

Kitchener delayed the assault on Omudurman until 2 September, by which time he was convinced he had enough firepower to destroy the numerically superior Dervishes.  In the end the victory was overwhelming, the fire from the gunboats, and cavalry charges being particularly effective.

Afterwards Kitchener was made a Lord as a result of victory, whilst David Beatty, Douglas Haig, and Winston Churchill all fought in the battle.  All of these were to play notable roles in the First World War, and in the case of Churchill the Second World War too.

TAGS : Omdurman Kitchener Winston Churchill General Gordan Mahdists Nile the Sudan Royal Navy British Army
Let us know how you like this article. Like it and Rate it below.
112 0
0
Thanks for rating this article
0 stars - by 0 user(s)

The Classical Dances Of India

India has eight classical dances. Read about them in detail below..

Martin Luther King Jr. was an unforgettable crusader for the rights of Blacks.