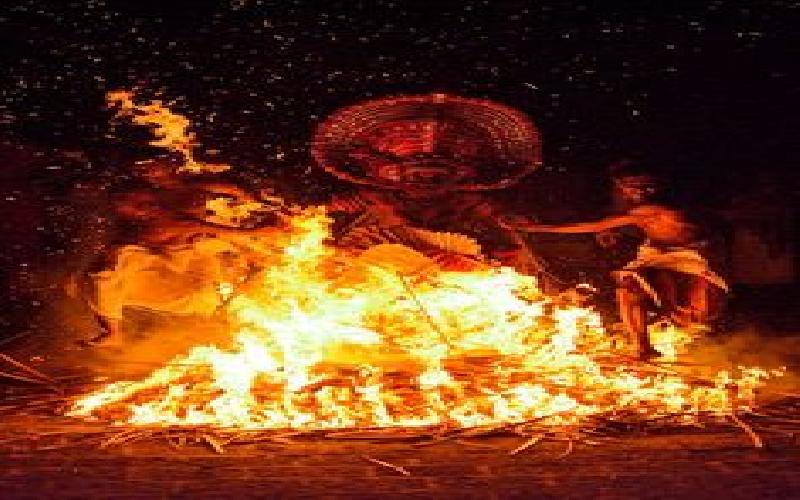 Folk arts is an inevitable part of Kerala culture. There are many; read about 5 of them here.

Kerala is the land of many art forms, both classical and folk. There are numerous folk arts in the state, and a major part of them are ritual arts, related to religion and castes. Many of the arts are performed by particular tribes. Before a few decades, these arts were very much active. But now, many arts are in the path of extinction, due to lack of new students and encouragement. Here is a list of 5 most famous folk arts of Kerala.

Theyyam is a folk art from northern Kerala.

A ritual dance, it is performed by artists from tribes like Vannan, Malayan, Velan, Pulayan and Cheravan. The word Theyyam means 'god' and the dance is usually performed to please the gods. The song sung during the performance is called 'thottampattu'. There are differences in the art according to the places.

Thira or Thirayattam is a ritual art from northern Kerala. It is very similar to Theyyam in some aspects. It is more popular in Kozhikode district than elsewhere. Like Theyyam, Thira is also performed to please Hindu gods. It is usually performed at night. Thudi, Chenda and Ilathalam are the various percussion instruments used in Thirayattam. In northern parts to Kozhikode, the word Theyyam is used to indicate both Theyyam and Thira.

Padayani is rather popular in central Kerala. It is a ritual dance depicting the events after the war between Kali and Darika in Hindu mythology. It is also called Padeni in some places. Padayani had been usually performed over a period of 13 days in the past but it has reduced to a single day now. It is mainly a prayer seeking blessings for a village. Thappu is the primary instrument used in the performance. The Padayani performance at Kadammanittakkavu is very famous.

Mudiyettu is another ritual dance performed in southern Kerala. The story of the war between godess Kali and Darika is presented in the art. Mudiyettu is performed around a lamp in the night. There are differences in the songs, customs and events in the stories according to the localities where the art is performed. In some places, it is also called Mudiyeduppu.

Tholppavakkoothu is a drama using dolls. It is mainly performed in parts of central Kerala like Palakkad and Ponnani. It is performed on a stage built in the premises of temples. Maddalam and Ilathalam are the major instruments used in the art. The Kambar version of Ramayana is the story used in Pavakkoothu, which is also called Pavakali.

TAGS : kerala arts kerala culture folk arts folk arts kerala
Let us know how you like this article. Like it and Rate it below.
2.97K 0
0
Thanks for rating this article
0 stars - by 0 user(s)

Read about the major cultural organisations of Kerala here. They make some unparallelled contributions to the culture of the state..