Did you know that there is only one radio station left in the Metro Manila area that bravely aired the on-going situation as well as serving as the “voice” of the Filipino masses during the 1986 EDSA People Power Revolution?

This radio station also serve as a source of information regarding the different personalities as well as the military troops who abandon their posts (one after the other) from the leader of the country former President Ferdinand Marcos.

In the heat of the on-going revolt by the citizens of the Philippines as well as the military troops who abandon Marcos on February 22, 1986. The government troops forcefully take over and control all forms of media, including radio stations. The takeover aims to provide a media blackout so that the Filipinos throughout the country will never received information to the on-going crisis and the gathering of Filipinos along EDSA. This is in particular to the area along Camp Aguinaldo and Camp Crame wherein the former Defense Minister Juan Ponce Enrile and Vice Chief of Staff Gen Fidel V. Ramos take refuge. Ramos and Enrile abandon their post from Marcos government allies with the opposition.

Meanwhile, in the Catholic Radio Station called Radio Veritas, the former Archbishop of Manila Jaime Cardinal Sin calls for the Filipino people to support and protect those personalities who revolted againt the Marcos Regime.

Because of this, the radio station becomes one of the main targets of the military troops who are loyal to Marcos.

They specifically targeted and bombed Radio Veritas’ radio transmitter tower in order to cut its main transmission capability. After learning this news, Fr. James B. Rueter ordered Radio Veritas’ newscaster June Keithly to go to another radio station – DzRJ – located in Sta Mesa to continue his live broadcast of what was happening to EDSA during that time.

Keithly along with a fellow newscaster and husband Angelo Castro bravely reported the current situation as well as providing vital information to the mobility of the Marcos forces. The information provided were used by oppositionist as well as the Filipino masses where to go and what will be the next action to be done. This happened during the last two days of the EDSA revolution which is the most crucial of the on-going event.

The Marcos troops spent all their time and resources to locate the whereabouts of the two journalists and their broadcast center, but they are not able to locate them. When the pro-Marcos forces could not find the radio station, they branded it as “Radyo Bandido” (Radio Bandit).

After the revolution, Keithly was awarded by President Cory Aquino the Medal of the Legion of Honor – the highest honor a citizen of the Philippines could ever receive from the government. While the radio station DzRJ was officially renamed as Radio Bandido and becomes a public service radio station.

June Kiethly finally signs-off on November 13, 2013 succumbing to breast cancer at age 66. While Radio Bandido also signed off officially on August 22, 2010 (because its popularity is waning off in the past years). It was now replaced by its English broadcast “The Voice of the Philippines” August 25, 2010.

TAGS : Radyo Bandido and the 1986 EDSA People Power Revolution June Kiethly and Radyo Bandido Radio Veritas and Radio Bandido
Let us know how you like this article. Like it and Rate it below.
125 0
0
Thanks for rating this article
0 stars - by 0 user(s) 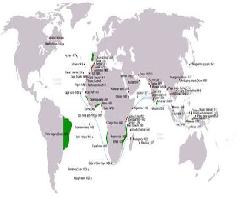 Port Blair In Andaman Has More Natural Diversity Than P

The article speaks about the difference of natural diversity between Port Blair in Andaman and Nicobar Islands and Pattaya in Thailand..