Joan of Arc- The Great Warrior

Why was the Joan of Arc called as a great warrior? 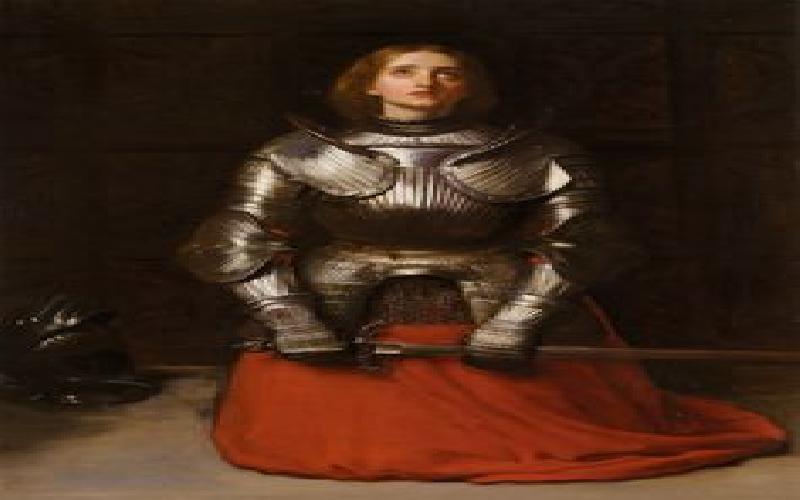 Joan of Arc is one of the glittering stars in the history of France. She fought valiantly for her country in the 100 Years War, sacrificing her life. Read about her below.

The tales of woman warriors are relatively rare in the history of wars. If one makes a list, the first name will be none another than Joan of Arc. She showed the world how a woman could successfully lead an army in the battlefield which was dominated by men. The French warrior's legendary battles were during the Hundred Years' War fought between England and France in the 15th and 16th centuries.

Joan was born on 6 January 1412, in a small village named Domreme in eastern France. Her parents were farmers. She helped her parents in work in her childhood.

She was very religious.

In 1417, England attacked France and took control of a major part of Northern France. By the age of 12, Joan had had some unnatural experiences. She often heard divine messages and so on. One of them was to go to church every day. After two years, she heard a message telling her to join the French army.

Even though Joan tried to join the army, she couldn't. The commander didn't allow her to join because she was a woman. But Joan kept her perseverance and tried again.

France was being governed by king Charles VII that time. They were losing its strategically important places slowly to the British. Joan once predicted in front of the commander that France would lose another battle. Even though he dismissed her prophecy initially, it proved true and he summoned her.

In 1428, at the tender age of 16, Joan visited the chief of army. After hearing her tale, he was amazed. He gifted her a sword and asked her to call on the king. With that sword she set off to the palace on a horse, disguised a servant. She reached the palace without any difficulty and met the king.

She told the king about her visions and asked him to conduct the coronation ceremony at Reemede Cathedral. She wrote to the British, asking them to retreat. Impressed with her, Charles VII gave her the commandement of the army.

Taking charge, Joan's first act was to raise the spirit among the soldiers. More than 4000 soldiers and many priests accompanied her in the following military campaign.

They regained control of many towns from the British. After the battles lasting a week, they captured the Toures Tower on the way to Orleans. Joan was injured in the battle, but she came back to the field, ignoring her injury. At the end of the battle, the British tasted an abject failure.

Joan and her army accompanied the King for his coronation to Reemde. After the ceremony, the British attacked them again and Joan was captured by the British. She was prosecuted in religious court and was convicted as a witch. She was ordered to be burned alive. In 1430, she was tied to a pillar and burned alive. 25 years later, the atrocious sentence was repealed by Charles II as a homage to Joan. Later, she was elevated to a Saint by the Pope as well.

TAGS : french history great wars great warriors war heroes
Let us know how you like this article. Like it and Rate it below.
119 0
0
Thanks for rating this article
0 stars - by 0 user(s)

Dubai Is A Great Place For Fun, Frolic And Art

Dubai is a entertainment center that is the place to let your hair down and have fun. It also has a rich cultural life..