Odaiba – The Manmade Island of Tokyo

The Most Sought After Tourist Destination in Tokyo 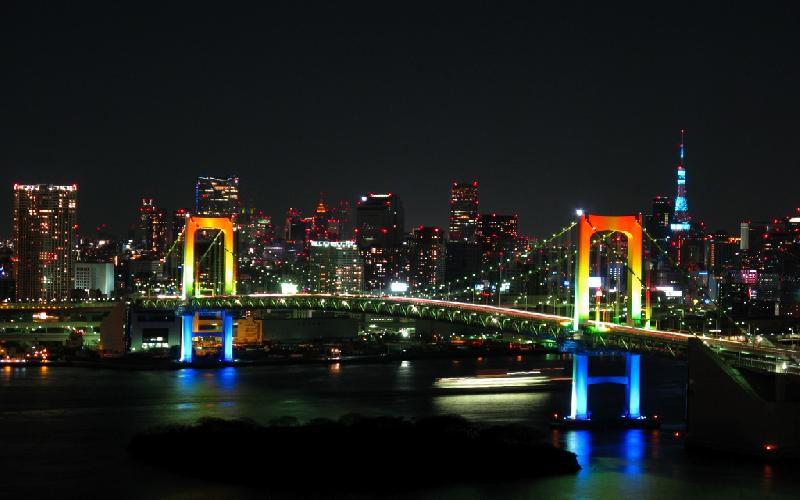 Odaiba is one of the favorite tourist spots in Tokyo, both for the locals as well as foreigners. It is a man made island, a handshake away from mainland, joined by a tunnel as well as a picturesque ‘Rainbow Bridge’ that connects it to Tokyo. The airborne road and rail connectivity provides the visitors with one of the most stunning views of Tokyo and a memorable ride. It is definitely a place that you cannot afford to miss while visiting Tokyo.

Odaiba has a special place in Tokyo’s modern history. This manmade creation on land reclaimed from sea represents the most modern Japanese fantasy that was fuelled by the booming economic growth of the later twentieth century. It can also be seen as an attempt to revive the lost glory of Tokyo, after it was nearly disseminated in the Second World War, with very little of its traditional splendour left intact. As Japan began to emerge from this destruction, initially it was all a matter of survival. Then the Korean War happened, making the United States realise its vulnerability in the far East and forcing it to approach Japan as a reliable ally in the region. The 1960s saw the people from all over Japan moving in to Tokyo as Japan experienced very high rates of economic growth.

By the late 1980s, Japan was the second largest economy in the world with visions of even surpassing the United States.

Around this time, the ambitions of having a very modern city began to resurface in Tokyo. It also resulted in Japanese Corporate and individuals getting lost in a wild goose chase for real estate ownership, which resulted in one of the greatest land price bubbles in Japan, especially in Tokyo. It is said that at one point of time, the market price of total land in Tokyo city alone was worth more than the whole land in the United States!

Odaiba was taken up as a project at this juncture. The submerged land around the 6th Daiba of Tokyo was enlarged and expanded using artificial means, Japanese technological prowess and sand from all over the world, bringing alive a manmade fantasy over the sea. At the end of 1980s, the Japanese Asset Bubble burst, precipitating widespread problems in Japanese economy. Ever since then, the trajectory of Japanese economic growth has been much slower. Yet that has not prevented the people from pursuing the fantasies they harboured at the time they were at the top of the world, including those ingrained in Odaiba.

The grand urban structure of Odaiba standing just a handshake away from the congested urban agglomeration of Tokyo makes it a great place to be on a holiday or a date for the locals. It is definitely a must for all foreign visitors.

Places to see in Odaiba

Today, Odaiba is a live testimony of Japan’s rise as an economic giant and the ambitions and aspirations of its people. It has enormous charm for all visitors, foreigners as well as local residents. Its most characteristic feature is the Rainbow Bridge, a curved structure made over Sea that links Odaiba with the mainland. It supports the driverless Yurikamome Rail that is a visitors’ delight, providing the visitors an excellent way of enjoying a memorable sky ride over sea through the skyscrapers, and a great view of the city of Tokyo, as also the sea line demarking it.

Odaiba is full of monumental architecture. The places to visit include the Dainkanransha or the Ferris wheel, which is the largest of its kind with a height of 115 meters. Each ride in a cabin on the wheel costs 900 yen. Each cabin accommodates six persons, except the glass cabins that seat only four. One complete revolution of the wheel takes sixteen minutes to complete. It is open from 10 am till 10 pm. Another attraction is the Oedo Onsen Monogatari, a hot spring theme park, which artificially creates the atmosphere of the Edo period. It is open between 11 am to 9 pm and has admission fee that varies between 2500 yen to 3000 yen depending on the day and time. Here one can have 14 different kind of hot spring baths, as well as enjoy restaurants, massage, games and other entertainment.

There are a number of shopping malls in Odaiba, for somebody on a buying spree. The grandest of them is the Venus Forte designed like a 18th century South European town within a palace, with over a hundred shops and eateries. There are many other shopping attractions, the best of which are the Aquacity Odaiba and the Decks Tokyo Beach. The Aquacity is a multi storied mall that lets the visitors enjoy the luxury of shopping and strolling on the seaside. Decks is a great place too, particularly for those who wish to hunt for the great bargains.

Odaiba also has many museums, the most prominent of which are the Miraikan (National Museum of Emerging Sciences) and the Museum of Maritime Sciences. Both of them are unconventional in many ways. Miraikan is a great place for youngsters, as it showcases new discoveries and science as part of modern life in a way that can attract them to science and its potential. The Museum of Maritime Sciences has the shape of a Cruiser, an apt representation of what it showcases inside. Then, of course, there is the Tokyo Big Sight, a perennial exhibition centre, perhaps the best in Tokyo. For a person obsessed with automobiles, there is Megaweb, where Toyota exhibits some of its best car models.

For those planning to relax and indulge, and those who have time at hand, there is Tokyo Leisure Land, which operates round the clock providing several options, such as gaming, karaoke and bowling for keeping one busy. For those wishing to stimulate their palate, there are several places to eat, though one would be advised to carry some eatables and drinks if making a quick short visit to the place. Lastly, Odaiba is worth visiting because of its scenic beauty, manmade of course. The design of its buildings seems to have been purposely planned to make them attractive for the tourists. Beginning with a replica of the Statue of Liberty, there are number of unnamed monuments and building that will catch the attention of any visitor taking a stroll in the neighbourhood of any of these tourist places.

Odaiba also hosts some of the top notch hotels, as well as the prestigious Tokyo International Exchange Centre (TIEC) which accommodates over a thousand foreign students coming to Tokyo for studying from all over the world.

One can easily spend a few days at Odaiba, if you have time. Otherwise, a day can be dedicated for it out of your itinerary. If one can afford to stay there, that may be a great experience. If time availability is very limited, one can begin after lunch in the afternoon. One of the options could be to take a Tokyo Cruise ship from Tokyo to Odaiba or back.

With all these attractions, Odaiba is sure to fascinate you. It is a visit that you may remember for a long time.

TAGS : odaiba Tokyo places to see in Tokyo Odaiba visit Visiting Odaiba Rainbow bridge Daiba Ferris Wheel places to see in OdaibaMiraikan Decks Tokyo Beach Dainkanransha
Let us know how you like this article. Like it and Rate it below.
206 4
2
Thanks for rating this article
5 stars - by 2 user(s)