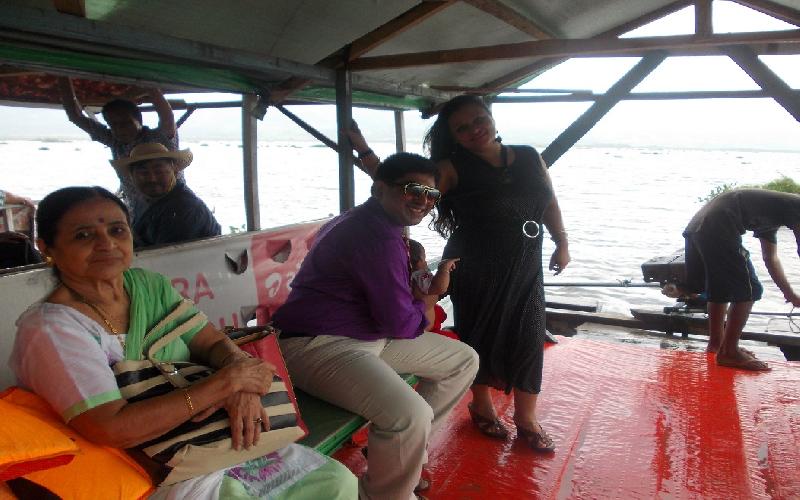 Manipur is called the Switzerland of the East. The blue Himalayan ranges, the beautiful Loktak Lake which is the largest fresh water lake of North East India, the Sandra Island, the Keibul National Park have huge natural treasures which amaze visitors.

Due to the lake effect again, Manipur gets a lot of rain, and there is no definite season where travelers can expect clear blue sky. It rains in May, June, July, August, September and October. Sometimes it is a drizzle, while at other times it rains cats and dogs.

There are beautiful Shikaras and house boats created at Loktak Lake which takes the visitors to a big distance. The time for which the travelers can travel in the boats, differ according to the rates. For example if the traveler pays Rs 1000 he or she can travel in boat or have the boat ride for 1 and a half hours. Those who pay Rs 300, the boat takes them for 20 to 25 minutes boat ride. It is a beautiful experience seeing the hills adjacent to the lake and also the green weeds floating on the lake.

Many tourists bring video cameras or with the cell phones make videos having music and acting which they record during the time when the boating takes place. A lot of shooting for Manipuri films and other films of the North Eastern states take place in the Loktak Lake. The languages of most of the North Eastern States like Manipur, Mizoram, Meghalaya, Nagaland are close to each other. So when films and videos are made with Manipuri language it becomes popular in the neighbouring states as well.

At the end of the Loktak Lake lies Sandra Island. It is not a proper island in the strict sense of the term but as there is landmass around 2 sides of the place and water on 2 sides it is called an island. It is not like Andaman and Nicobar Islands, where the small islands like Ross Island, Viper Island, Havelock Island, Neil Island, Red Skin Island, Jollybuoy Island have water on 3 sides of the island.

There are many hill top points in the Sandra Island, from where the beautiful valleys of Manipur are seen and also Loklak lake existing at the base of the mountains. The Himalayan range which has run all across North Eastern states like Meghalaya, Manipur, Mizoram, which separated India from Myanmar, China, Tibet can be seen from the hill top points.

Many tourists take lunch in the Classic group of hotels in the Sandra Island. Generally the hotels provide chicken chowmin and chicken friedrice. It is sensible to go for chicken dishes in this part of the world, because the fish items are risky for health. As Manipuri people also eat Burmese, Chinese and Tibetan dishes, they also eat those fishes which others in India don’t take. For example there are many dishes made with the squid fish, which is known for injecting ink in the face of other marine organisms when they are attacked by them. The Manipuri people had got used to digesting these dishes. But for people outside Manipuri, they may get stomach upsets in case they have these fishes in their lunch. There is another factor, that people outside Manipur have a diet full of fried fishes. The river fishes like Rohu, Katla, Mrigel, Bhetki and carps are fried first of all, then a curry with potato, brinjal are made which is eaten with rice. The Manipuri hotels and restaurants have the tendency of cooking these fishes with steam, meaning either they are not fried or not fried at all, so a smell of half-cooked fish comes out which does not make the food that tasty.

At the foot hills of the Sandra Island exists the Keibul Lamjhao National Park in Manipur. It is a very big national park full of wild grasses and wild vegetation. The only animal which stays in that National Park is the horned Shanghai. It is the state animal of Manipur. It is a horned deer which is harmless and feeds on wild grasses, leaves and wild vegetation. There are many hill-top points in the Keibul Lamjhao National Park from where the visitors use binoculars to see the Shanghai roaming in the National Park. But only lucky people can see them, as first of all they are very shy and does not want to meet human beings, secondly as the grasses existing in the national park are so tall, that they get hidden underneath them and it is not possible to see them with naked eyes.

The Sadhu Chiru Water falls is another tourist attraction in the vicinity. The falls is created by snow fed peaks of the Himalayas. Visitors are required to climb them following the geographical route created by the falls. It is a pity that proper stairs are not created for people to climb. After around 100 steps, there is no railing. Those who have children with them return back without seeing the falls. Others climb the kutcha road to the falls and take pictures of the fall. If Manipur earns a lot from tourism, then the local self-governments should make proper steps and railing for people to reach the summit and enjoy the water falls.

It is a lifetime experience to see the different natural wonders of Manipur. Travellers and tourists should have the patience and energy to walk barefooted, climb steep slopes, sweat a bit to cover the tourist attractions. Nature has really gifted Manipur with a lot of ecological treasure. Visitors should visit Manipur once in their lifetime.

TAGS : Manipur Keibul National Park Sandra Island Loktak Lake Shanghai Sadhu Chiru Waterfall
Let us know how you like this article. Like it and Rate it below.
571 1
0
Thanks for rating this article
0 stars - by 0 user(s)

Andaman Island is famous for its tourist traffic. There are many tourist spots to visit and one of them is Car Nicobar.