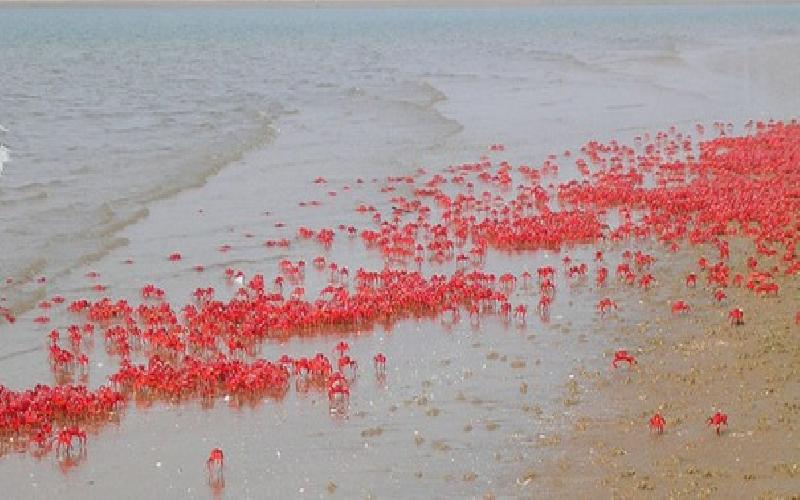 In the evenings when the sun is at the verge of setting the red crabs in the Mandarmani Beach make the environment romantic. It is a lifetime experience to view it.

Mandarmani Beach is situated within 160 kilometers from the city of Kolkata. It has emerged as one of greatest weekend destinations for the city dwellers of Kolkata and other parts of West Bengal.

It is a treat for the eyes to see the great waves of Bay of Bengal hitting the sands of West Bengal. In Mandarmani there are different tourist destinations.

One group of tourists spend time during the morning and noon time in the brilliant sands. The sands get warmer and yellow texture of the sand acts as velvette bed for the tourists who go for sunbathing. December - January and May - June are the peak period for visiting Mandarmani Beach.

At the same time there is crowd of visitors who come to Mandarmani even during the monsoons in the months of June and July.

Just because the sands are powdery and not course and the extent of sand cover is very wide, many group of tourists come to Mandarmani to engage themselves in motor races because the cars and travel at least 3 to 4 kilometers in the sands. The landmass is quite away from the sea and that gives huge amount of space for the visitors to engage themselves in sand sports.

A big section of the travelers engage themselves in the sport of paragliding. There are a number of centers where the parachutes and devices for paragliding are taken on rent. Visitors who are daring go for the sport. But it is a bit risky when the winds are slow. There had been cases of a number of accidents that has taken place over the last few years when the tufts of sea breeze stopped suddenly and the ropes of the paraglider got stuck to poles and traveler fell in the sand from great height and got severely injured.

As far as nature lovers, botanists, zoologists are concerned there is another area of interest in the sands of Mandarmani. The greatest attraction for them is the existence of red crabs who had made the sands of Mandarmani their habitat. According to science, any place which a living organism makes a home and contribute to the biosphere is considered to be a habitat which in scientific terms is also called the ecosystem. For the red crabs the sands of the beaches especially the ones near the Mohna of the Mandarmani beach is the ecosystem and their habitat.

They dig holes inside the sand and make their living by catching other marine creatures like sea-shells and snails their victims. But they are very cautious in the context of facing human beings in the beaches.

During the evening when the sun almost sets all of a sudden the skies become crimson. The temperature also reduces down which makes the place very romantic. The slow sea breeze which touches the different summer clothes of the travelers give everyone a soothing experience. At that time an entire colony of red crabs come out of the yellow sands. They crawl towards the sea waters, spend some time over there and again come back and get back to their holes inside the sand. The period for which they come out inside the beach and towards the sea, they make the yellow background of the yellow sands look red like vermilion. It is a treat for the eyes. Travellers use their cameras to take snaps and videos of the red crabs coming out of their holes and crawling towards the sea.

Many local kids catch the red crabs by hands and ask the travelers to take snaps of the red crabs holding them on their hand. It is a lifetime experience. As long as the small tea stalls and other shops are not allowed to encroach upon the plain sands of the Mandarmani Beach especially towards the mohna the habitat of the red crabs will remain forever.

These days a number of elegant hotels and restaurant chains developed around Mandarmani for tourists who want to spend time in the weekends and also make a tour for the entire place for a period of 7 to 8 days. The most prominent hotels in the area include the Sonar Bangla, Rose Valley, etc. Sonar Bangla has a majestic swimming pool inside the complex. Visitors who stay there spend time in the pool both in the morning and also in the evening in addition to swimming in the sea waters. The water is warm, clean and the pool adjacent to the sea beach, which allows the sea breeze to entire the entire green background. It is a brilliant experience to swim in the swimming pools. Even Rose Valley has many sports equipments and visitors can take many rides which can keep them entertained.

There are a number of tourist destinations around Mandarmani like Shankarpur, Udainarayanpur, Talsari which are sea beaches at the vicinity of Digha. The entire place is surrounded by cashew nut trees and the leaves of these trees swinging in the sea breeze makes the environment even more romantic. Tourists visit the Science Centre in Digha, they go to Kapalkundala Temple which is situated within 18 kilometers from Mandarmani, also Chandaneswar Mandir and Amravati Lake.

The entire place has become very prominent and attractive for honeymoon couple as well. From Kolkata if anyone goes by car or by bus it takes 4 and a half hours to reach Mandarmani. Whenever there are combination holidays like Diwali or Holi, people spend 3 to 4 days in Mandarmani Beach.

Even if they fail to recollect the summer breeze of the Bay of Bengal across the cashew nut trees or the colourful sea-shells around the yellow sands, what they cannot forget is the lifetime experience of a bunch of red crabs coming out of the holes in the yellow sands of Mandarmani beach and then travelling towards the Bay of Bengal during evening. It is a lifetime experience.

TAGS : Mandarmani Digha beach red crabs Bay of Bengal Sonar Bangla Kolkata
Let us know how you like this article. Like it and Rate it below.
811 1
0
Thanks for rating this article
0 stars - by 0 user(s)

10 Essential Things You Should Carry Along On A Vacatio

Dwell deep with a list of essentials you should carry along on vacation. .